In 1910, the two-man startup that would later be known as Black & Decker came into existence. Starting with a small shop that built milk cap and candy dipping machines, the two founders secured a patent for a one-half inch portable drill a few years later. From there, the company took off running, and in 10 years’ time, Black & Decker netted more than $1 million in sales.

After spending the 1950s and 1960s focusing on lawn equipment and NASA-exclusive tools, Black & Decker turned its efforts toward household appliances. The company’s initial endeavor was the first-ever handheld vacuum cleaner called the Dustbuster, which hit the market in 1979. This revolutionary vacuum offered unheard of convenience and led to the contemporary-style handheld vacuums that are available today. 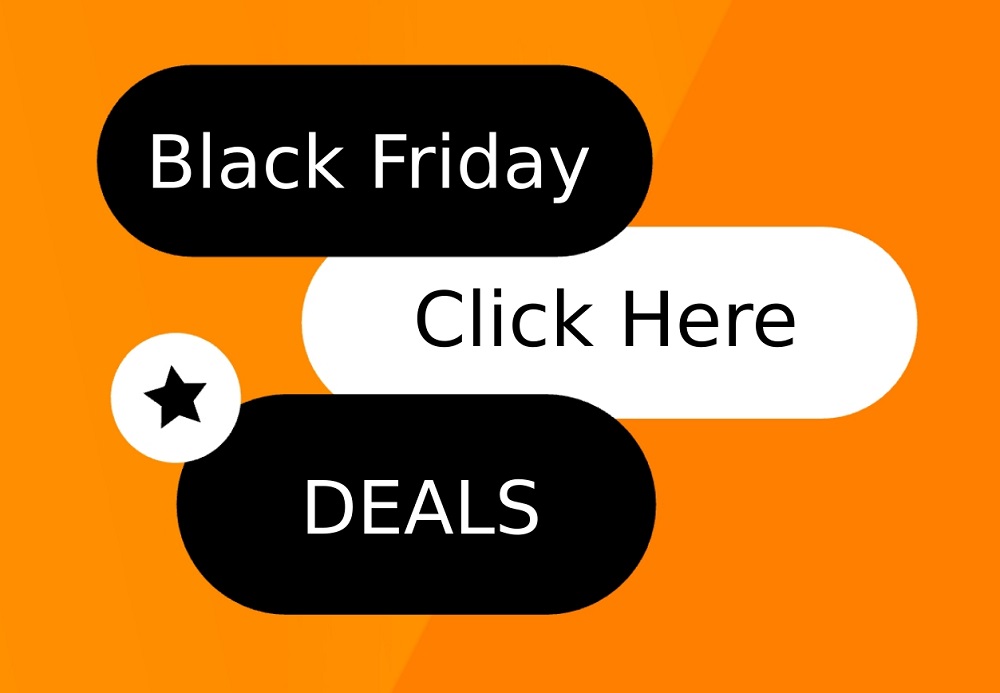 To look at how far Black & Decker has come from its original Dustbuster, we decided to review two of the manufacturer’s latest Dustbuster models. Since both handheld vacs have name descriptions that are only distinguishable by long model numbers, we’ll refer to each one by its color for the sake of clarity.

The inception of the Dustbuster created an entirely new category of vacuum cleaners, earning it a spot in the Smithsonian Institution. Unlike the lightweight versions of today, the first Dustbuster had a heavy casing, making it durable.

There was even a television ad in the 1980s that showed the handheld vacuum being dropped repeatedly without sustaining damage.

Within the cream-colored handheld vacuum, there was a 3.6-volt nickel-cadmium battery, which provided a run time of about 7 minutes. To start the vacuum, you had to hold down its ribbed sliding switch. When you were finished cleaning, you could set the vacuum on its massive cradle, which was wall mountable.

This hand vac was soon followed by the coffee-colored Dustbuster Plus that contained a 6-volt nickel-cadmium battery, which promised double the working time.

From their strong suction to their user-friendly design, both of these Dustbuster hand vacs are handy household helpers. They utilize cyclonic suction for superior filtration and suction that won’t quit when you need them the most.

Plus, each vacuum contains a powerful lithium-ion battery that produces high levels of air watts.

For detailed vacuuming tasks, the Dustbusters come with two attachments. Whether you use it for 2 minutes or 10 minutes, your hand will never get tired thanks to the vacuums’ ergonomic handles. Charging is easy to do with both models even though each one has a unique storage and recharge setup. Plus, the dust cups have a large capacity, saving you time otherwise spent on trips to the trash.

You’ve probably heard of vacuum manufacturers boasting that their products have cyclonic suction. There is a reason that cyclonic suction is a desirable feature. As opposed to straight suction, the cyclonic type separates fine particles from coarse ones, preventing the vacuum cleaner from becoming clogged.

These handheld vacs are equipped with a cyclonic suction system. The BLACK+DECKER CHV1410L handvac produces 15.2 air watts of suction, putting the vacuum in the medium-duty category.

On the other hand, the BLACK+DECKER HHVI325JR22 Dustbuster generates 21 air watts of suction, which makes it perfect for heavy-duty chores like workshop cleanup.

Each battery offers 15 to 20 minutes of working time, which is long enough to clean up small messes around your home. Compared to other handheld vacuums, these models have a short charge time of around 4 hours. To recharge the BLACK+DECKER CHV1410L, simply rest it on the circular charging base. On the other hand, the BLACK+DECKER HHVI325JR22 comes with an adapter plug and a wall-mounted caddy for convenient storage.

Even though the vacuums’ wide nozzles allow you to quickly clean dirt and debris from all types of surfaces, there are times when you need concentrated suction. Both of these vacuums have a slim nozzle that rotates for optimal maneuverability, and each one is fitted with a hinged brush that flips up and down in an instant.

With the BLACK+DECKER HHVI325JR22 Dustbuster, you get an extra feature. Since the handheld vacuum’s nozzle is extendable, it’s well-suited for vacuuming in narrow gaps like the spaces between couch cushions. It’s also a great vacuum to have when you need to clean awkward nooks and crannies such as those in your car.

You won’t feel like it’s arm day at the gym after you use these vacuums. Both models are ultra-lightweight, coming in at about 2.5 pounds. Plus, their handle is designed for comfort thanks to its curved loop. You’ll also find it easy to control the suction to the hand vacs by simply holding down the fingertip power switch.

There are no differences in regard to the way each handheld vacuum filters dust and other fine particles. Both models contain a mesh filter that is washable, saving you money on replacement costs. The 20.6-ounce dirt cup on each vacuum cleaner is translucent, so you can easily tell if it’s full. When you need to empty them, all you have to do is remove the nozzle and shake out the contents over your garbage can.

Neither the BLACK+DECKER CHV1410L nor the BLACK+DECKER HHVI325JR22 delivers weak suction or super-short run times. Therefore, both models are more than capable of meeting the demands of a busy household. Since each one weighs less than 3 pounds and has a looped, the vacuums are easy enough for children to use.

Both models are equipped with a convenient flip-up brush, and the ink blue Dustbuster’s nozzle even extends to give you plenty of reach. When it comes to filter maintenance, taking care of these vacuums’ filters is a breeze. Black & Decker has certainly come a long way from the first Dustbuster made almost 40 years ago, and these two handheld vacuums are proof of that.

Best of the Best!
For Tight Spaces
Popular Option 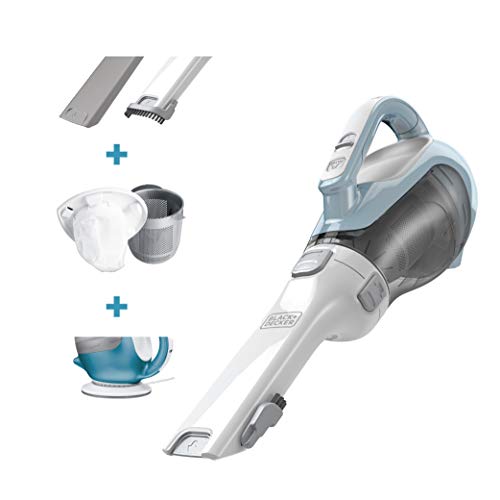 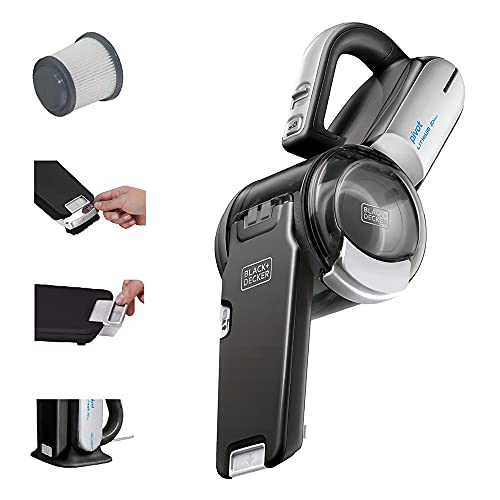 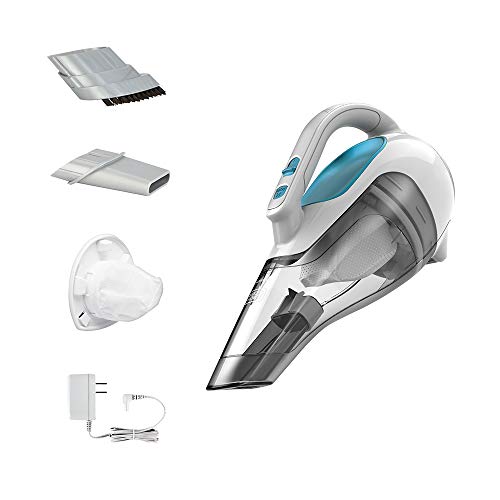 B+D CHV1410L
• 2.6 lbs
• Suction Power 15.2 AW
• Dustbowl 20oz
• 17.25 x 5.5 x 7.75 in
This CHV1410L model is about average in weight and isn't fatiguing to carry around in a single hand for most people. We found the integrated tools to be very convenient and it is very easy to empty the dust container.
Check Latest Price
For Tight Spaces

B+D BDH2000PL
• 3 lbs
• Suction Power 35 AW
• Dustbowl 15oz
• 18 x 6.88 x 6.75 in
The Black+Decker BDH2000PL struggles on hardwood flooring, but it had impressive suction on most other tests, and the rotating head makes it easy to reach difficult spots.
Check Latest Price
Popular Option

Handheld vacuums, whether or not powered from rechargeable batteries or a power cord, are popular for cleaning up small spills. 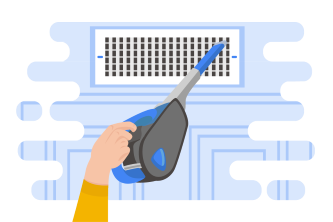