Forget the dry cleaner! Put more money back into your pocket with one of Steamfast’s home-use steam presses. Steamfast has been in the business of manufacturing quality garment steamers for a fraction of the price charged by other big-name brands.

If you’re looking for a more convenient way to press and crease your clothes, look no further than the Steamfast SF-623, the SP-660, and the SF-680. 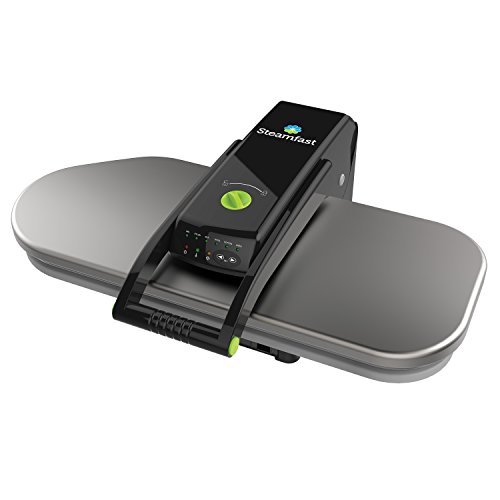 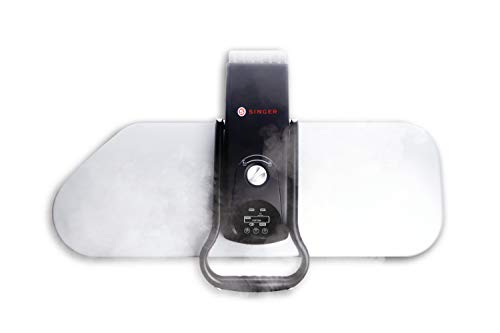 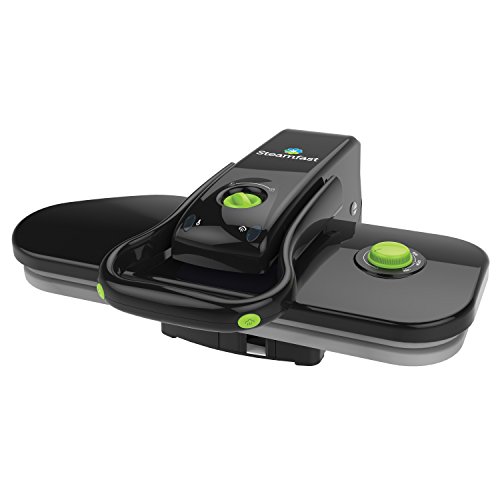 Each steam press offers several settings that are tailored to the type of fabric you’re dewrinkling. While their pressing surfaces differ in size, they are all coated in non-stick material. You’ll appreciate how quickly every steam press machine heats the water regardless of their individual tank’s capacity.

Due to the locking mechanism on all three models, none of these Steamfast steam presses will fall off the table or ironing board while in use. Their steam burst function offers an extra shot of steam for extra-wrinkled fabric, and each model comes with three accessories to make garment pressing easier. Steamfast SF-623
Out of all three steam presses, the Steamfast SF-623 is the lightest one at 12.83 pounds, making it a breeze to carry and a space-saver for long-term setup. This glossy black steam press features a non-stick pressing surface that measures 8 inches by 20 inches.

With a power cord that is 6.6-feet long, you won’t need an extension cord to reach the nearest electrical outlet.

Steamfast SP-660
The midsize Steamfast SP-660 is heavier than the SF-623, weighing 19.6 pounds. However, its compact size still makes it easy to manage. Like the other two models, this steam press has a 6.6-foot-long cord and a non-stick surface, which has dimensions of 8.7 inches by 22 inches. Since Steamfast gave this press a white finish, it fits nicely in any kitchen or laundry room. Steamfast SF-680
As the largest of these steam presses, the SF-680 weighs 21.4 pounds, which isn’t much heavier than the SP-660. Again, it boasts a non-stick pressing surface. This surface measures 10.5 inches by 25 inches. You also get plenty of leeway for placement with a 6.6-foot-long power cord, and its stainless steel finish with black accents give it a decidedly modern appearance.

Conclusion: No matter how frequently you plan to use your steam press or what type of garments you need to dewrinkle, there is a Steamfast model for you.

Steamfast SF-623
Even though the Steamfast SF-623 is the smallest steam press, it’s the most powerful. This pressing machine has a motor that draws 1,500 watts of energy.

Coupled with a small tank that holds 5.07 ounces of water, the typical heat time takes no longer than 3 minutes. To protect the appliance from overheating, an auto shutoff mechanism engages after a period of non-use. Steamfast SP-660
Inside of the SP-660, there is a highly capable 1,300-watt motor. Underneath the steam press, you’ll find the 10-ounce water reservoir. When full, the water in the tank gets hot enough to produce steam in about 3 minutes.

For safety, Steamfast equipped the SP-660 with shutoff switch that kicks in when the steam press hasn’t been used for a while.

Steamfast SF-680
To meet the demands of a steam press this size has, Steamfast added a 1,350-watt motor to the SF-680. The tank is large with a capacity of 10 ounces, yet the heating time is short at 3 minutes.

The reservoir is easy to fill – Simply slide it out, unscrew the cap and add water. As with the other two steam presses, this model has an auto shutoff switch to prevent instances of overheating. Conclusion: Each steam press’ motor varies in strength with the SF-623’s being the strongest followed by the SF-680’s. While the SP-660 and the SF-680 have a 10-ounce tank, the smaller SF-623 has a 5.07-ounce reservoir. However, all three heat the water to a steam-producing temperature in only 3 minutes, and they are equipped with a safety shutoff switch.

Steamfast SF-623
Adjusting the production of steam is super simple with the Steamfast SF-623. On the steam press, there is a turn dial with a setting for cotton, linen, nylon, silk and wool and another dial that locks the press into place.

The two buttons on the steam press’ handle allow you to generate extra steam with either hand. As a bonus, you get a spray bottle for moistening fabrics, a pressing cushion and a measuring cup. Steamfast SP-660
The controls on the SP-660 are similar to those on the SF-623. One dial controls the amount of steam that comes out of the press to one of five degrees. The other dial locks and unlocks the clamp that keeps the steam press secured to your work surface.

You can activate the steam-burst function with one of the two buttons on the handle, and there is a spray bottle, a measuring cup for tank fill-ups and a pressing cushion. Steamfast SF-680
Most of the controls on the Steamfast SF-680 are digital. Instead of a fabric-setting dial, there are digital buttons with corresponding labeled indicator lights. For the steam-burst function, Steamfast kept the dual push buttons that the other two models have on their handle, and the locking mechanism is still a dial.

In addition, the SF-680 comes with a pressing cushion for creasing collars and sleeves as well as a measuring cup and a spray bottle.

Conclusion: From the five-level steam dial to the press lock, the SF-623 and the SP-660 offer traditional dials while the SF-680 has digital buttons. All three steam presses let you increase the steam for a few second with on-handle push buttons. Plus, Steamfast throws in helpful accessories like a pressing pad and a measuring cup. Steamfast added an auto shutoff switch for safety purposes and a straightforward dial lock to prevent the steam presses from sliding off the table or ironing board. Each model boasts two steam burst buttons on the handle, and all of them come with three accessories.

However, the steam presses differ in terms of finish and weight. Their non-stick pressing surfaces even vary, and there are slight differences in the strength of their motors. The SF-623 has a 5-ounce reservoir while the other two steam presses’ tanks are twice as large in capacity.

Bottom line – None of these Steamfast steam presses will disappoint. 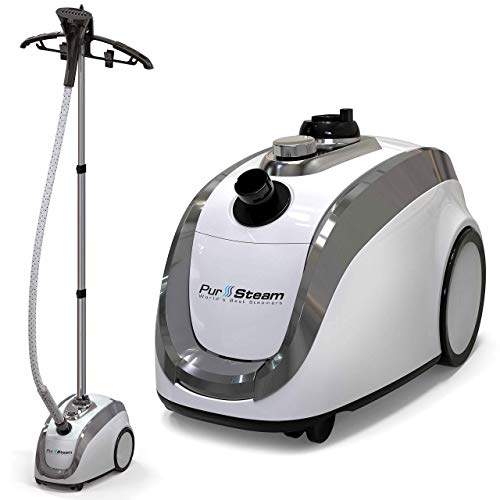 A garment steamer is a device for getting the wrinkles out of clothing; however, there is no need to set up a separate ironing board like when you use an iron to do the same thing. Garment steamers use water to gently (and quickly) steam any creases out of garments.