Nowadays, a single-trick robotic vacuum cleaner is not so much in-demand as their hybrid counterparts. But Samsung’s developed one of the most futuristic robot vacuums released in the first half in 2022. This robot is called the Samsung JetBot 90 AI+.

So, what makes this Samsung vacuum bot so special? We’re certain that you’ll find its premium-grade features a breath of fresh air after looking at its current competitors. Check out the descriptions of the JetBot 90 AI+’s most notable features down below.

Based on the images and videos Samsung has released, it appears that it has taken a completely unique approach in the JetBot 90 AI+’s design. It has a squared bottom base and a circular top “deck,” not unlike most traditional robot vacuums.

The benefit of such a lower deck is that it can fit into tight corners instead of relying on side brushes to pull debris in. The huge drawback, at least from what we can see from this model, is that the upper deck adds height to the robot, so it might have trouble fitting under low-hanging couches.

Jet Live Home Monitoring
Monitor the status of your home by streaming real time video to your mobile phone.

The JetBot 90 AI+ uses LiDar instead of traditional VSLAM or SLAM to navigate its way around your home. LiDar can create ultra-precise digital maps based on its surroundings, as opposed to VSLAM that takes several images and stitches them together. Of course, with LiDar technology, you’ll have to pay a premium price, but with pinpoint mapping precision, it’s definitely worth the added cost.

No-Go Zone/Select & Go
Select where Jet Bot should orshould not clean right from your mobile device. Jet Bot recognizes rooms and cleans areas selectively based on your preferences.

Apart from the LiDar navigation system, the JetBot 90 AI+ comes with something called Object Recognition Technology. From its name alone, you can probably already guess what it’s all about, but allow us to explain why this is a big deal.

If you’ve ever owned a robotic vacuum cleaner before, then you’ve probably found it nudging objects out of its way. These objects could be pet or children’s toys. However, if it bumps into a pet’s water bowl or a vase, then you’re looking at a pretty huge mess to clean up later.

But thanks to Object Recognition Technology, the JetBot 90 AI+ automatically knows what it can nudge and what it should stay away from.

It’s programmed to avoid fragile items like vases and identify pet water bowls that could short its circuitry. This is a huge development in the robotic vacuum game, but we won’t know how well it performs until the robot’s release later this year.

But the magnificence of the JetBot 90 AI+ doesn’t stop there. Controlling your robot from your phone is nothing new, but what the SmartThings App offers is beyond crazy.

First of all, you get the standard functions: modifying cleaning schedules (time, days, modes, areas to clean), and you can define no-go zones to stop the robot from cleaning specific rooms or areas. But the most brilliant feature in the SmartThings app is that you can stream video from the JetBot 90 AI+’s camera.

We want to introduce you to one of the unique features of modern robotic vacuum cleaners. The JetBot 90 AI+ comes with a retractable camera that lets you remotely monitor your home from the SmartThings app.

Basically, if you get this robot vacuum, you’ll have a cleaning machine that doubles as a roving security camera. There’s no better way to learn what your pets are doing than to spy on them through the vacuum’s camera lens.

Another shining feature in this Samsung-made bot is the self-emptying base. This system was introduced in 2012 but only became popular following the release of iRobot’s i7+ and s9+ models. Since then, robotic vacuum manufacturers have followed suit, and Samsung is no exception.

But the JetBot 90 AI+’s self-emptying and charging station tool is unique in terms of how long a single bag can last. Based on Samsung estimates, the bag requires changes once every two to three months.

However, without knowing the self-emptying base’s storage levels, we won’t know for certain how many cleaning sessions it’ll take before the bag reaches full capacity.

Live Cleaning Report
Check Jet Bot’s status in real-time using SmartThings App. Check where it has cleaned, instruct it to pause or stop, and view the cleaning history.

Another interesting feature in this robotic vacuum cleaner is the filtration system. According to the manufacturer, this robot’s filter is more efficient than True HEPAs.

Its filtration rating is 99.999% efficient as opposed to HEPA’s 99.97%, which means significantly better cleaning performance in the long run. We’re curious as to what filter Samsung uses in the JetBot AI 90+, but alas, we’ll have to wait to find out. 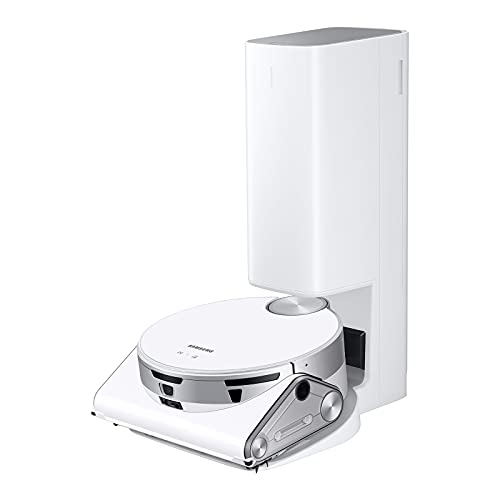