If you’re looking for a more affordable alternative to high-end robotic vacuum and mop hybrid bots, your search is over. Introducing the Roborock E5, a 2-in-1 robot that does a surprising amount of cleaning such an inexpensive device. Read our review of the Roborock E5 to see whether this is the right robot for your carpets and bare floors.

The first thing you should be aware of is just how powerful the E5 is. At most, it can deliver up to 2500 Pa of suction power, which is right up there with many high-end models made by more high-end brands.

You can either activate it manually so that the E5 runs continuously on max mode, or you can activate Carpet Boost Mode, which automatically sets suction power to the max when the robot steps “foot” on carpets. Most customers would recommend using the latter as it’ll help conserve battery life.

Another thing worth noting about this budget-friendly model is that its navigation system, while high-tech, isn’t the most advanced out there. It relies on OpticEye Navigation and dual gyroscopes to maneuver around your floors. These systems pretty much prevent the robot from falling down cliffs and bumping into hard objects.

However, what’s neat about OpticEye Navigation is that it provides 360° vision, allowing the robot to locate and head directly toward its charging dock with minimal issues. We’ve seen this sort of technology used in iRobot models, and we’re glad that Roborock has followed suit.

Like most modern robots, the Roborock E5 offers voice support, which lets you sync the robot to your Alexa or Assistant device. Using your smart speaker, you can send basic commands to the robot (start, stop, recharge, set up cleaning schedules) without the press of a button.

Inside the Roborock, you’ll find a massive 5200-mAh battery pack, which supplies as much as 180 minutes of cleaning time per charge. According to most users, three continuous hours of cleaning can leave an entire floor nearly spotless after just a single session.

Sadly, the Roborock E5 doesn’t come with an auto-resume function. When it returns to its charging dock either to recharge or after completing a cleaning session, it’ll await further orders before commencing a new cleaning cycle. In addition, it won’t pick up where it left off, so the E5 will begin its new cleaning cycle from its charging station outward.

In addition to sporting a humungous battery that puts many high-end models to shame, the E5 also has a pretty large dustbin. It can carry as much as 640 mL of dust and debris at a time before you need to manually empty it out. Sorry, folks who are looking for a robot with a self-emptying bin. You won’t find it in this Roborock.

Compared to other pricier models by Roborock, the E5 has anywhere from 20 to 25% more storage capacity. So, you’re spending less on a robot that requires less maintenance than its costlier brethren. Not too shabby, in our humble opinion.

With your Roborock E5 Robot Vacuum, you’ll find a frisbee-like attachment that connects to the charging station. This serves to prevent water from leaking from the tank (not a huge issue) and moistening your hardwood or carpeted floors.

This is to be used in conjunction with the Snap-On Mopping Module, which lets you choose between two water level settings—low and high. The module uses a slide-on microfiber cloth that’s washable for up to six months, per user reports. Even though it’s “wipes” more than it mops, it’s still a game-changer for those who are used to single-trick-pony robots.

The Mi Home App doesn’t support virtual boundaries with the E5, which can be a huge source of frustration for those that don’t want a robot venturing into their study rooms or home office units. However, it’s compatible with magnetic strips that stick onto the floor and send the robot in another direction upon contact.

You can use pretty much any magnetic strip from any brand, though customers highly suggest choosing an on-brand strip roll. It goes without saying that the magnetic strips are sold separately. The E5 doesn’t require them to operate; just to stay out of certain areas and/or rooms.

One of the Roborock E5’s features that left us pretty shocked is how the 640-mL dustbin comes with an E11 HEPA Filter. Now, E11 HEPAs aren’t True HEPA Filters—they don’t capture up to 99.97% of particles down to 0.3 microns in size. However, they’re as close to True HEPA as can be, and anything of that quality is worth it in a robotic vacuum cleaner.

The E11 HEPA is washable for up to six months, though your mileage will vary depending on how often you run your E5. Make sure you replace it in time to prevent clogging and improper vacuuming.

If you’ve used the Roborock S7 before, then you’re probably accustomed to the awesomeness of its rubberized brush rolls. You’ll also know that hair has a hard time sticking and wrapping around rubber brushes, thereby preventing your robot from choking to death by long stray strands of pet hair. Unfortunately, the E5 doesn’t come with this.

Instead, it features a standard brush roll with somewhat stiff bristles that dig deep into carpets and corners. Just something to know if you or your pets shed a lot.

Verdict: A Sweet Robot with Sufficient Bells and Whistles for Less

It’s clear that the Roborock E5 Robot Vacuum isn’t the most feature-packed robot out there. However, it is a decent 2-in-1 mop and vacuum bot that navigates expertly around obstacles, despite not being able to store maps.

The long runtime combined with a large dustbin and ultra-powerful suction practically guarantee grit- and hair-free floors after one or two deep-cleaning cycles. 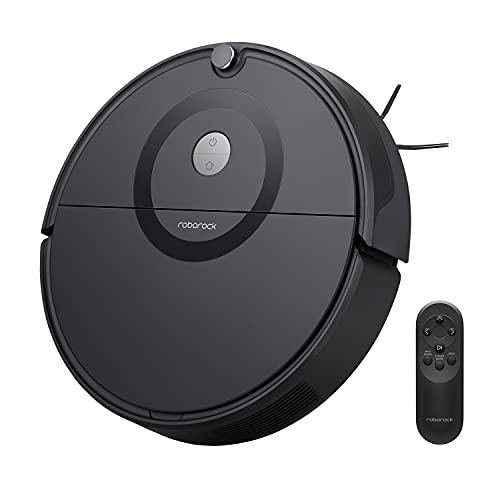