Eufy brings you a robotic vacuum/mop in an efficient, powerful package. The RoboVac L70 Hybrid generates strong, steady suction that automatically increases when it hits carpeting. Wi-Fi connectivity allows for app and voice control. A washable micro-particle filter provides excellent allergen reduction, and its time-saving cleaning path squeezes every minute out of the robot’s already-long runtime.

The Eufy RoboVac L70 Hybrid is loaded with all the components necessary for comprehensive vacuuming. It has a hard-bristled brushroll and a side spinning brush. The 58-decibel suction system generates 2,200 pascals of BoostIQ suction power, which increases almost instantly when the L70 Hybrid detects carpeting.

When using the robot as a mop, you can change the amount of water released from the reservoir to suit the surface it’s cleaning. From there, the L70 Hybrid controls the water flow, ensuring no drips or puddles are left behind. The mop pad that comes with the robotic vacuum/mop is washable and highly absorbent. 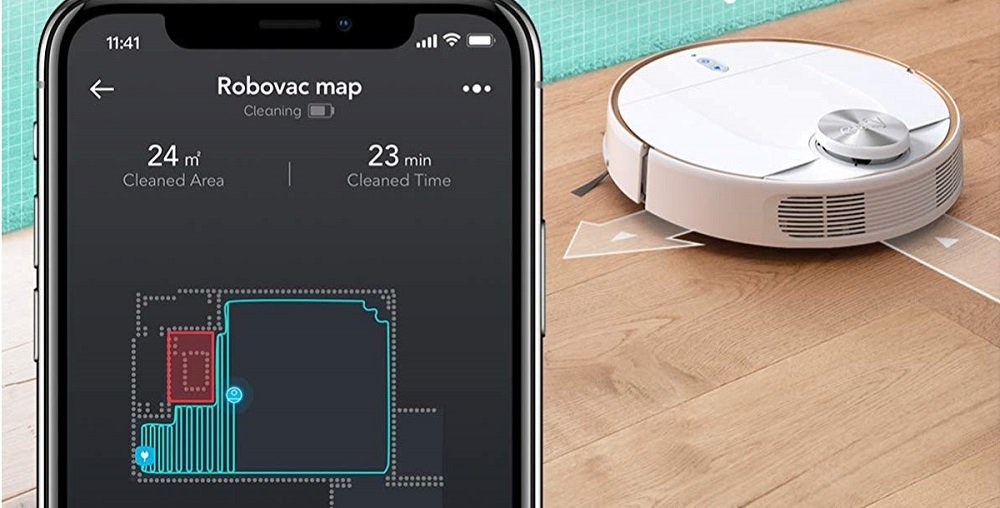 The more efficient a robot’s cleaning path, the more floor it will cover per battery charge. The RoboVac L70 Hybrid moves in the most efficient way of all – a zigzag pattern. Using AI Map Technology, the robotic vacuum creates and remembers a map of your home after its first pass-through.

Fall-prevention sensors mean you can let the robot clean upstairs without it taking a tumble. It’s also compatible with boundary tape should you choose to buy a roll. Treaded wheels give the 3.96-inch-tall L70 Hybrid exceptional climbing ability, and the robot’s plastic cover is less likely to shatter than tempered glass. 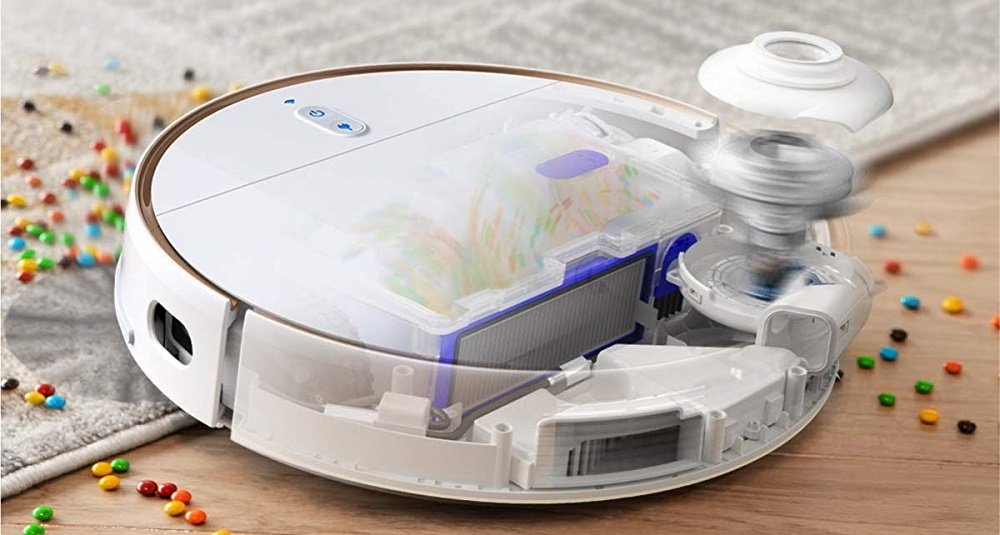 Wi-Fi Connectivity and a 2.5-Hour Runtime

As a Wi-Fi-enabled robotic vacuum, you can control it with the EufyHome smartphone app. From the app, you can block off the robot’s access to any part of your home and select specific zones where you want it to vacuum or mop. With a Google or an Amazon virtual assistant, you can give the L70 Hybrid voice commands too.

Inside the RoboVac L70 Hybrid, there’s a lithium-ion battery that keeps the suction strong no matter its charge level. The battery’s capacity of 5,200 milliamperes provides an amazingly long runtime of 2.5 hours. When the battery needs to recharge, the robot self-docks and continues to clean afterward.

The L70 Hybrid’s dirt bin’s capacity is on the larger end of average. It can hold 0.45 liters’ worth of debris, so you won’t need to empty it frequently throughout the day. As opposed to a cumbersome bin that you pull out from the side, the bin sits under a top-loading compartment.

Eufy chose a three-in-one rinsable filter for this robot, which includes a pre-filter, the main filter and an odor-reducing filter. The main filter is rated at E12, which is equivalent to an H13 filtration media. Therefore, the E12 filter is able to trap 99.95 percent of particles as small as 0.01 micron.

You can control exactly where the robot goes with a smartphone or a voice command, and the auto-dock/resume function ensures a low battery won’t stand in the way of clean floors. As great as the L70 Hybrid performs, it’s not the only robot that can mop. Check out these robots by iRobot, Ecovacs and Roborock.

Unlike the Braava Jet M6, the L70 Hybrid not only mops but also vacuums, and it’s equipped with a side brush for dirt collection. While you can adjust the flow rate, the Braava Jet releases a strong spray as opposed to using the L70 Hybrid’s drip-to-pad method. The M6 also has a pad-eject button to keep your hands clean.

Both robots are able to connect to your home’s Wi-Fi network for smartphone control and access to an interactive map. They also pair with an Amazon or a Google device, so you can issue voice commands. While the L70 Hybrid and the M6 offer localized start and dock buttons, the Braava Jet m6 also has a spot-clean button.

The iRobot Braava Jet M6 can hold more in its reservoir, which is approximately the same size as the Eufy RoboVac L70 Hybrid’s dirt bin. The L70 Hybrid’s tank slides onto the bottom, but the L70’s bin and the M6’s reservoir are top-loading. Only the L70 comes with reusable pads – the M6’s mop pads are disposable.

Anti-fall and laser sensors guide both robots, and each one has smart-mapping capability. Eufy’s app offers virtual boundary creation while Braava Jet M6 works with a physical dual-mode virtual wall. However, the M6 is 0.46 inches shorter, and it’s squared for superior corner/edge cleaning. Plus, it can pair with certain Roomba vacuums to synchronize vacuuming and mopping.

These two robots run on the power supplied by a rechargeable lithium-ion battery. When the battery gets low, they travel to their dock, recharge the battery and continue cleaning. iRobot put a drip pan on the Braava Jet M6’s dock to keep water off the floor. This feature is absent from the L70 Hybrid’s dock because it’s unnecessary.

Both the L70 Hybrid and the Deebot M80 Pro lift dirt from carpets with their brushroll. The M80 Pro has two instead of one spinning brush, cleaning wall edges from either side. However, suction increase is automatic and manual as opposed to just a manual function. While each robot wet mops, only the M80 Pro dries after it mops.

Each one is enabled with Wi-Fi, so you can access functions from your smartphone, but the L70 Hybrid’s app allows for more interactive control. Although they both pair to Alexa, the L70 Hybrid also works with Google Assistant. If you want a regular remote control, you can get one with the M80 Pro.

The robotic vacuum/mops’ respective reservoir and bin secure to the housing the same way. The reservoirs slide onto the underside of the robots. While their bins sit inside a top-loading compartment for easy access, the Ecovacs Deebot M80 Pro‘s bin is slightly larger. However, the L70 Hybrid has a more efficient filtration unit.

Both robots use infrared sensors to detect ledges. As far as which robotic vacuum has the more advanced navigation system, the RoboVac L70 Hybrid wins hands down with Eufy’s inclusion of a laser sensor and smart-mapping technology. Still, the Deebot M80 Pro can travel to more areas since it’s 0.63 inches thinner.

Similarly, the L70 Hybrid and Roborock S5 have a drip-style water-release system and come with a reusable mop pad. Each one has an auto-suction function, but the L70 Hybrid’s suction is slightly more powerful. However, the S5 offers four suction modes instead of two. This robot also has a floating brushroll and two variable-speed side brushes.

Wi-Fi connectivity means you can use your smartphone to control either one of these robotic vacuum/mops as well as set no-go areas and a zone-cleaning queue. Plus, both the L70 and S5 work with Google Assistant and Amazon Alexa. If you choose, you can start a cleaning session from the robot itself; the S5 even has an onboard spot-mode function.

Although the L70 Hybrid can trap more allergens with its E12 filter, its filter and the Roborock S5’s E11 filter are washable. There are even water filters in the S5’s reservoir. Both robots’ tanks secure to the undercarriage while their dirt bins are accessible by opening the door on the top panel.

These two glossy white robotic vacuum/mops are circular and stand 3.9 inches tall. For smart mapping, the RoboVac L70 Hybrid uses AI Map Technology; the Roborock S5 relies on SLAM technology along with a laser-distance sensor. They are both well-adept at avoiding objects and stairs thanks to their array of infrared sensors.

Each robot can run for 150 minutes on a full charge. Their 5,200 mAh lithium-ion battery promises unwavering suction whether it’s at a 25-percent or a 75-percent charge. They’re even programmed to drive to the dock on their own to recharge and start vacuuming or mopping again after the battery reaches 100 percent.

In many respects, the Eufy L70 Hybrid and Roborock E35 vacuum with the same intensity. Both are equipped with a brushroll and a side sweeper. They also mop hard floors with a washable pad and increase the suction when vacuuming carpets. While the L70 generates 200 pascals more suction, the E35 suctions as it mops to dry the floor.

Onboard both robots, there is a dock and a start button, but the Roborock E35 also has localized spot-clean engagement. These two robotic vacuums can be controlled with their manufacturer’s smartphone app. Although voice commands are a third option, the E35 is limited to Alexa compatibility – the L70 Hybrid works with Alexa and Assistant.

While their bins load from the top and reservoirs attach to the bottom, the L70 Hybrid’s dirt bin holds 6.4 ounces more dirt. Unique to the Roborock E35 are dual filters in the water tank. However, the E35’s suction-system filter is an H11 instead of an H12 media, which means it’s 0.45 percent less efficient.

Route planning and laser-sensor navigation give both robotic vacuum/mops the ability to move in a logical zigzag pattern when vacuuming, but the E35 reverts to straight-line movements when mopping. Even though these robots contain infrared sensors, the Roborock E35 also has a gyroscope to help orient itself.

Their battery and charging configurations are basically carbon copies of one another. The L70 Hybrid and Roborock E35 contain a lithium-ion battery with a high capacity of 5,200 mAh. Therefore, both boast a 2.5-hour runtime. Additionally, each robot continues to clean from the exact place where it stopped before it automatically docked to the charger. 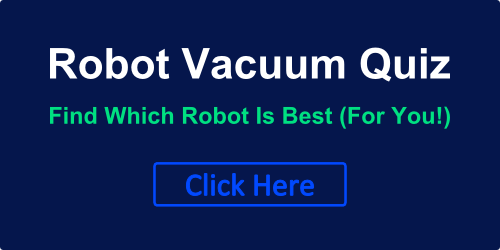 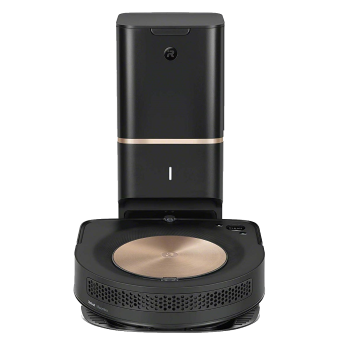 About Robot Vacuums
Robot vacuums are smarter and faster than ever before. At HouseholdMe you can find the best models you can buy right now.

We use cookies and similar technologies to measure traffic OK