Perfect for pet owners! Dyson took its ever-popular V6 and boosted the motor’s power by 75 percent to bring you the cordless V7 Animal Pro+. With a multi-surface brushroll and five accessories, you can use this nimble stick vacuum to clean your home and your car. There’s even a Max suction mode you can activate when vacuuming high-traffic areas.

The HEPA filter traps dander and dust, and it’s easy to remove and rinse. Your hands will never get dirty when you empty the debris bin thanks to its door lever. Dyson’s decision to use a nickel magnesium cobalt cathode for the lithium-ion battery means the battery will provide unwavering suction for years.

On the 5.5-pound V7 Animal Pro+ stick vacuum, a direct-drive floor head produces powerful pressure to loosen and lift embedded dirt from carpets and stuck-on debris from hard floors. The brushroll’s wide window allows for quick tangle inspection. Since the stick vac lays almost flat, you can use it for under-furniture cleaning.

Press a button to remove the floor head and use the V7 Animal Pro+’s balanced wand for above-head vacuuming. Another button push transforms it into a close-up handheld vac. With the Pro+ version, you get five quick-release tools, including the flexible crevice that’s ideal for cleaning in between the fridge and the adjacent kitchen cabinet.

Loose hair and dander go hand-in-hand with pet ownership. Two tiers of 15 total radial cyclones provide exceptional allergen capturing. In the center of these tiers, there is a true-HEPA filter that traps 99.97 percent of allergens as small as 0.3 microns. To rinse the filter, simply pull it out from the top of the cyclones’ housing.

Attached to the cyclones is a translucent dirt bin. The bin boasts a decent capacity of about 0.5 liters, and there’s a prominent fill line to prevent dirt and debris from clogging the vacuum. You can empty the bin without getting your hands dirty by simply pulling the lever, which opens the bottom door.

Two mechanisms control the Dyson V7 Animal Pro+’s suction. The gun-grip handle is equipped with a squeeze-and-hold trigger that provides on-demand suction without wasting the battery’s charge. A slider on the handle lets you instantly go from normal suction to Max power mode. In Max mode, you get 6 minutes’ worth of extra-strong dirt-lifting suction.

As an upgrade from the V6’s motor, the digital V7 motor is an improvement in terms of airwatts. The motor spins at a rate of 107,000 rpm, pushing out an impressive 100 airwatts of suction strength. You also get the benefit of a 2-year parts-and-labor warranty, which is longer than the industry standard.

To power the cordless stick vacuum, Dyson selected a rechargeable battery. Since the battery contains a nickel magnesium cobalt cathode, it has a longer lifespan than other types of lithium-ion batteries. The battery runs for 30 minutes in normal suction mode and 20 minutes in handheld mode, giving you plenty of time to vacuum.

When the battery needs to be charged, or whenever you’re done cleaning, rest the battery on the wall-mounted charging dock. The average recharge time is approximately 3.5 hours, which is relatively fast. The dock also offers a few storage slots, so your most-used accessories will always be on hand.

Powerful Suction in a Simple Package

If you have cats that love to lounge on your sofa or kids who tend to leave snack crumbs all over your car, this is the vacuum for you. The V7 Animal Pro+ generates incredibly strong suction. It’s user-friendly, and it comes with more than enough accessories to handle any cleaning task.

Dyson also makes other great all-around stick vacuums, including the V7 Motorhead and the V8 Animal. There’s also a stick vac that rivals Dyson; it’s made by the up-and-coming Tineco brand. Check out how these stick vacuums compare to the V7 Animal Pro+.

With their direct-drive brushroll, you can use the Dyson V7 Animal Pro+ and V7 Motorhead to clean hard floors and carpets. The bristled brushroll is covered by a huge window for instant obstruction checks. Thanks to the head’s thin profile and the vacuums’ ability to lay almost flat, there isn’t a dust bunny you won’t be able to reach.

Although both stick vacs come with a balanced (albeit different colored) wand, the V7 Animal Pro+ offers more accessories. With the Pro+, you get a flexible crevice tool, a mini-motorized upholstery brush, a stubborn-dirt brush, a combo crevice/brush and a traditional crevice tool. The Motorhead’s accessory compilation only consists of a basic crevice tool and a dust brush.

The V7 Animal Pro+ is a boon for pet owners with its true-HEPA filter. This filter traps allergens down to 0.3 microns in size, including dander and pollen. While the V7 Motorhead has a standard filter, both stick vacs’ filters are easy to remove and rinse, and each one separates dust via 15 double-stacked cyclones.

A see-through container and a dark fill line ensure you’ll never surpass these vacuums’ 0.5-liter dirt capacity. The best feature of the dirt bin is the hygienic lever. Placed on the top to keep your hands far from the bottom-opening door, there’s a pull-up lever that instantly shoots dirt and debris into the trash can.

These 100-airwatt Dyson stick vacs are equipped with a lithium-ion battery that lasts up to 30 minutes between 3.5-hour recharges. An on-demand trigger helps you make the most of each run cycle, and a slider increases the suction when necessary. Each V7 model comes with a wall-mounted charger that has two accessory holders.

At only 5.5 pounds, you’ll find the V7 Animal Pro+ and the V8 Animal easy to tote up and down the stairs. Both of them are equipped with Dyson’s all-floor direct-drive head. The brushroll inside the windowed floor head is affixed with nylon bristles, which are highly efficient at loosening dirt and debris.

The V7 and V8 come with multiple hand vacuum accessories. While both vacuums have a crevice tool, a motorized upholstery brush and a dual crevice/brush, the V8 Animal also has a soft dusting brush. Although the V7 Animal Pro+ doesn’t come with a soft brush, it does offer a stubborn-dirt brush and a flexible crevice tool.

Dyson kept the same filtration setup for the V8 that it put in the V7. Both Animal versions have a double-tier of 15 radial cyclones to separate dust from debris. The dust and other allergens are captured by the central HEPA filter. With regular rinses, this filter will last a lifetime.

While the V7’s 100-airwatt and the V8’s 115-airwatt motor run, the debris are sent to the 0.5-liter bin. Once the dirt level reaches the fill line, one quick lift of the lever is all that’s needed to dump the bin’s contents. To shut the bin, just push down on the lever. Your hands will stay clean the entire time.

Each stick vac has a battery-saving suction trigger, but the V8 Animal has a higher capacity lithium-ion battery. Therefore, its runtime lasts 10 minutes longer on normal suction and 2 minutes longer on Max suction. However, the V7 Animal Pro+ takes 1.5 hours less to recharge. Both come with a wall charging dock that holds two tools.

The V7 Animal Pro+ and the A10 Hero were made for all floors. Both the Dyson and the Tineco are lightweight at 5.5 pounds and 5 pounds, respectively. While 100 airwatts of suction helps the V7 lift dirt, the A10 produces 10 airwatts more suction. The A10 is also has a half-foot wider cleaning path and running headlights.

On the vacuums’ gun-grip handle, there’s an on-demand suction trigger and a Max suction slider. However, you can lock the A10’s trigger for continuous suction. When set to Max mode, the vacuums’ respective 350-watt motor provides a suction boost, but the A10 will hold that strength for 4 minutes longer.

HEPA filtration comes standard on the Animal Pro+ and the Hero. Both stick vacs have rinsable filter media. However, the location and all-in-one configuration of the V7’s filter makes it easier to clean. The Dyson V7’s bin holds 3 ounces more debris. While the A10 bin’s open-door button requires less force, the V7 bin’s lever also closes the bin.

Both stick vacuums have a lithium-ion battery, but the V7’s battery runs for 5 minutes longer. Plus, the wall dock that comes with the Dyson makes charging the V7 a streamlined process. While you have to partially disassemble the A10 to use the storehouse charger, it’s a good option for renters who can’t put holes in the wall. 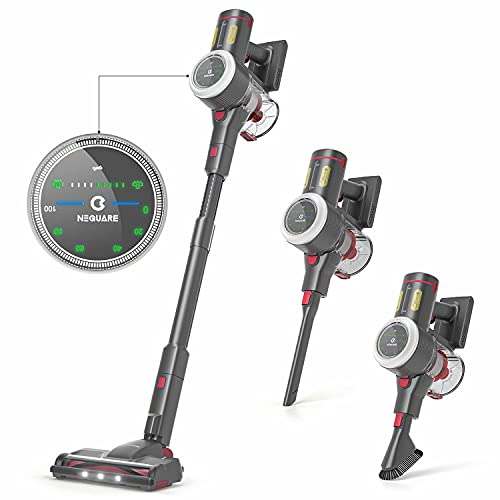 Tineco A11 Hero
40min Run Time
5.5 lbs.
The A11 Hero is a high performance cordless vacuum featuring a 450W motor and up to 120W of suction power for deep, thorough cleaning on any floor surface.
Check Latest Price
Budget Option 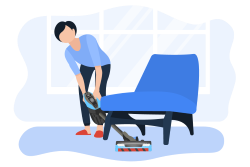