Small or large, every home and apartment in the country needs at least one air purifier. This device helps rid the air of funky odors and airborne contaminants that would otherwise be nearly impossible to remove. This time around, we’re going to look at space-saving, super-sleek wall mounted air purifiers.

They’re not unlike traditional floor or desktop air purifiers. However, instead of shooting purifier air from the back, this device typically has an upward-facing exhaust port, which improves the distribution of clean air throughout a room.

Why Should I Get a Wall Mounted Air Purifier?

Another huge benefit of a wall mounted air purifier as opposed to a more traditional version is the aesthetics. While looks don’t matter as much as functionality, it’s still a major point of consideration. These devices come in a variety of different shapes, sizes, and colors. Some of the most eye-pleasing wall mounted air purifiers have large display panels that come with customizable backgrounds.

Before settling on a wall mounted air purifier model, you need to ensure that the device is up to the task of cleaning your home’s air. Here, we’ll briefly go over the most important variables that will affect the air purifier’s performance.

Every air purifier model has a maximum coverage area. Generally speaking, wall mounted air purifiers have a shorter reach of around 600 square feet on average, which should be more than enough for living rooms, kitchens, and home offices.

Clean Air Delivery Rate and Air Change per Hour figures are used to determine how effective an air purifier is as removing airborne particles. Ideally, you’ll want higher CADR figures, though it ultimately depends on the air purifier’s max coverage. As for ACH, this figure denotes how quickly the device will remove contaminants in a given coverage area.

Air purifiers can come with a variety of filters. For the most part, air purifiers have a pre-filter for removing large particles before the air passes through an activated carbon filter, which traps odor molecules. The ideal filter for maximum air-cleaning performance is a True HEPA Filter that traps particles as small as 0.3 microns in size up to 99.97% of the time.

Some of the more feature-packed air purifiers come with ionizers and/or UV-C kill chambers. Ionizers negatively charge airborne particles, making them stick to filters more easily. UV-C kill chambers can help eliminate viruses and bacteria by deconstructing them at a molecular level. Both of these features produce ozone, a type of lung irritant, albeit at low levels. Still, you should only operate these modes in empty homes via a smartphone app (if available).

Wall mounted air purifiers don’t always have to rest in a bracket system. They can sit comfortably on a floor, in which case you should make sure that the device is lightweight enough to move. The physical size of the air purifier will also help you determine the device’s ideal placement.

A particle or air-quality sensor is more of a convenience-adding feature than anything else. The sensor constantly monitors the concentration of airborne particles in a room. When the concentration surpasses a certain threshold, the air purifier will automatically turn on, activating one of the fan speeds. After the air has been purified, the appliance’s motor will shut down until it’s needed again.

This is another nice-to-have feature that lets you monitor the air quality status of a room. By connecting your smartphone to the air purifier, you can send commands, read status reports, adjust display settings (if available), and even set up different accounts with preferred settings.

Below, you can check out our picks of the best wall mounted air purifiers.

The best wall mounted air purifier you can get today is the MinusA2 SPA-700A. This adaptable air purifier operates as either a stand-alone device that can sit in the corner of a room or be mounted onto a wall with the included bracket.

With pollen, dust, and smoke CADR of 171, 173, and 166, respectively, the SPA-700A is far from being the most effective air purifier. However, with maximum coverage of 700 square feet, its mid-range CADR ratings are above average.

This air purifier offers filter customization, where users can replace the standard HEPA filter with a toxic absorber, an odor remover, a pet-allergen remover, and a germ defense. All in all, the SPA-700A offers six filtration stages to ensure maximum cleaning performance. 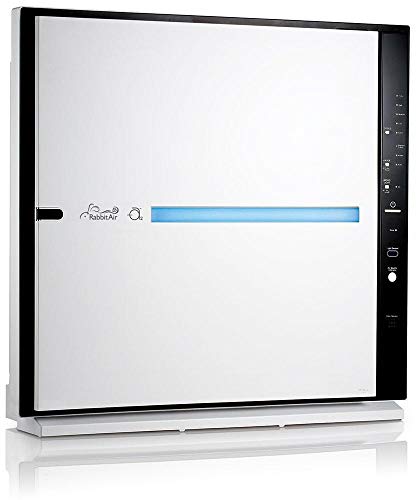 The MinusA2 SPA-780A is a larger version of the previous RabbitAir model. It has an 815-square-foot reach and CADR ratings of 200, 193, and 180 for pollen, dust, and smoke, respectively. Surprisingly, this unit is just as compact and lightweight as the SPA-700A while also being significantly more powerful.

The MinusA2 series comes with air-quality sensors that will take control over which fan speed (six in total) to run in order to remove air contaminants efficiently. Another thing that customers like about the SPA-780A is its ultra-quiet operation of around 71 dBA at its highest speed. In every other regard—customizable filters, different display settings, and installation—this air purifier is identical to its smaller version.

If you’re looking for a wall mounted air purifier that offers remote control via Wi-Fi connectivity, the RabbitAir MinusA2 SPA-780N is your best bet. This device is identical to the SPA-700A in every way except for the addition of internet compatibility. 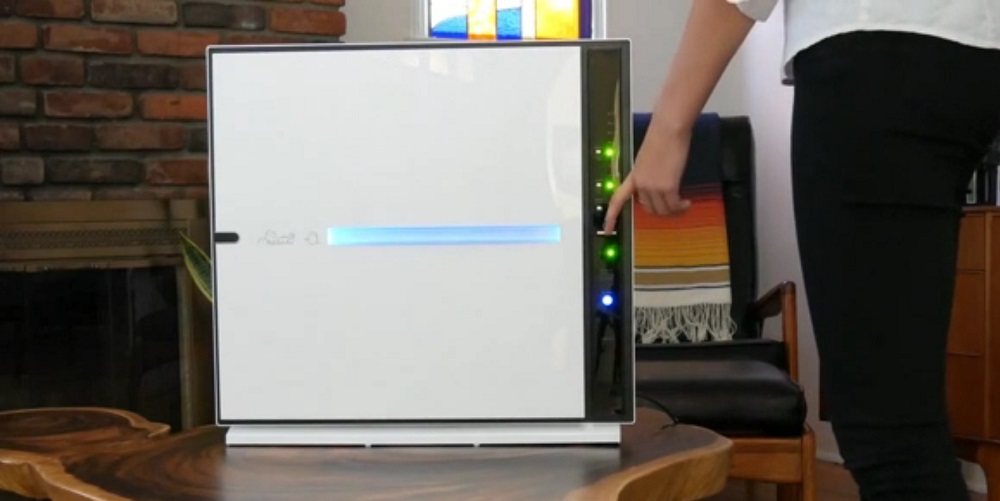 The SPA-780N can receive controls via the Rabbit Air smartphone app. Users can program cleaning schedules, scroll through display patterns, and create different accounts with customizable settings. The smartphone app also displays filter status reports, eliminating the guesswork of replacing any of the six filters. Remote controllability is a huge upside for users who want to utilize the negative ion generator that makes particles adhere to the filters more easily. 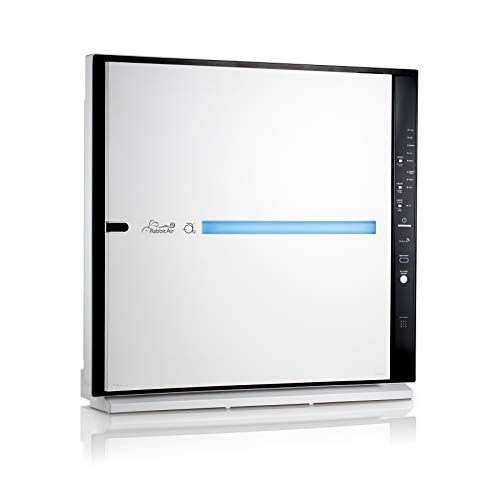 Best of the Best!
Most Popular
Also Great

Coway Airmega 400
LEVOIT Vista 200
Winix 5300-2
• For Large Rooms
• 22 - 43.2 dB
• 4-Stage Filtration System
• For Small Rooms
• 26 - 50 dB
• H13 True HEPA Air Purifier Filter
• For Mid-Sized Rooms
• 27.8 - 60 dB
• 3-Stage Filtration System
CADR 350 Dust | 350 Pollen | 350 Smoke
CADR 110 Dust | 110 Pollen | 110 Smoke
CADR 243 Dust | 246 Pollen | ‎232 Smoke
If you have a large space you want to remove irritants from, We recommend the Airmega 400. All of Coway air purifiers do an excellent job of attacking indoor pollutants, and we highly recommend any of them.
The Levoit Vista 200 air purifier has some strong suits, but in our opinion it falls short of carving out a meaningful niche for itself. Its ideal use would be in a small bedroom occupied by someone who is sensitive to noise.
With high end air cleaning performance and a whisper quiet fan, the Winix 5300-2 is the perfect combination of power and finesse. It cleared airborne particulates out of our smokey testing room faster than any other model.
Check Latest Price
Check Latest Price
Check Latest Price
Best of the Best!

Coway Airmega 400
• For Large Rooms
• 22 - 43.2 dB
• 4-Stage Filtration System
CADR 350 Dust | 350 Pollen | 350 Smoke
If you have a large space you want to remove irritants from, We recommend the Airmega 400. All of Coway air purifiers do an excellent job of attacking indoor pollutants, and we highly recommend any of them.
Check Latest Price
Most Popular

LEVOIT Vista 200
• For Small Rooms
• 26 - 50 dB
• H13 True HEPA Air Purifier Filter
CADR 110 Dust | 110 Pollen | 110 Smoke
The Levoit Vista 200 air purifier has some strong suits, but in our opinion it falls short of carving out a meaningful niche for itself. Its ideal use would be in a small bedroom occupied by someone who is sensitive to noise.
Check Latest Price
Also Great

Winix 5300-2
• For Mid-Sized Rooms
• 27.8 - 60 dB
• 3-Stage Filtration System
CADR 243 Dust | 246 Pollen | ‎232 Smoke
With high end air cleaning performance and a whisper quiet fan, the Winix 5300-2 is the perfect combination of power and finesse. It cleared airborne particulates out of our smokey testing room faster than any other model.
Check Latest Price 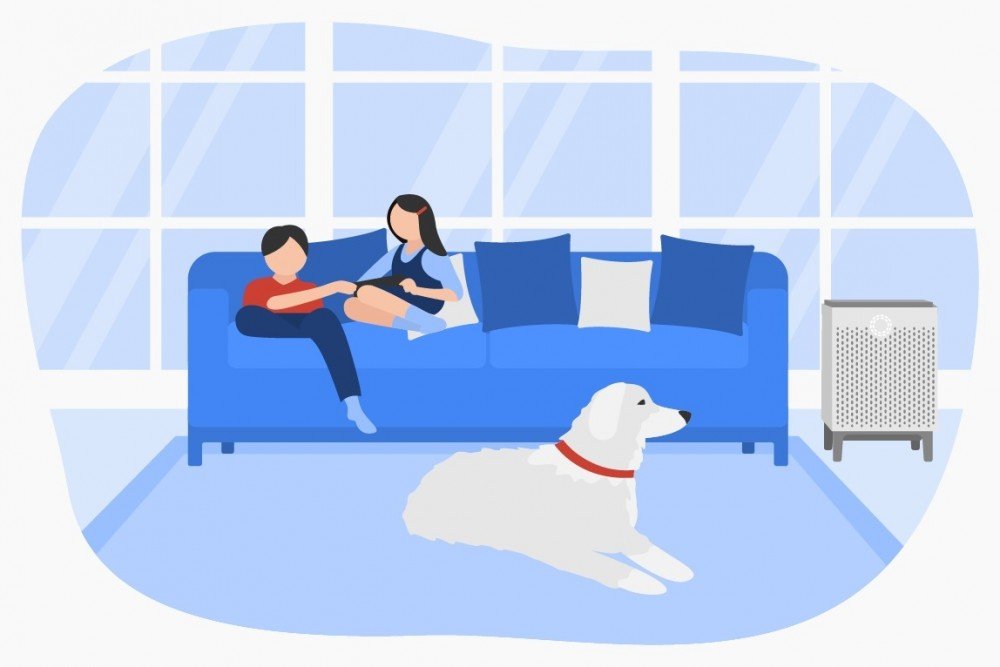 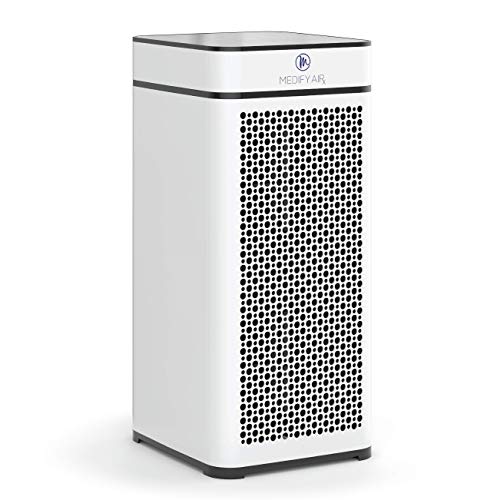